Sylvia: Hi Ricki, it is such a pleasure to interview you.  Please give our readers a brief introduction of yourself and a little about your book. 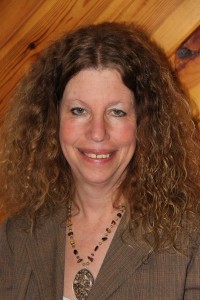 Ricki: Thank you Sylvia. My name is Ricki Lewis and I am a science writer with a PhD in genetics. After writing several textbooks and thousands of magazine articles, I am most excited about my first narrative nonfiction book, “The Forever Fix: Gene Therapy and the Boy Who Saved It,” published by St. Martin’s Press in March 2012. It is the story of a lifetime: a reborn biotechnology that gave the gift of sight to an 8-year-old. In a compelling, novel-like style, I chronicled the ups and downs of gene therapy through the eyes of the children, parents, researchers, and dogs who have experienced it.

I grew up in Brooklyn, New York, and went to Stony Brook University. I earned my doctorate in 1980 from Indiana University, working with flies that had legs growing out of their heads and mouths. Not seeing a bright future in healing insect appendages, I took a graduate science journalism course, and my life changed.

Today I am a regular guest blogger for Scientific American, write news for Medscape Today, and is mulling over my next book project.

I am married to Larry Lewis, a chemist at GE, and we live near Schenectady, NY and sometimes on Martha’s Vineyard.  We have three grown daughters, many felines, and a tortoise. I love hippos and drive a royal blue mini-Cooper named Tawanda.

Sylvia: What an amazingly interesting life. I just love the name of your car, too cute! What inspired you to write your first book?

Ricki: My answer is very boring! I was a young professor at Miami University, teaching and doing research in genetics, while also writing for magazines. Textbook publishers sent acquisitions editors to universities to sign up professors to write books. When the editors saw my magazine articles, they urged me to submit book proposals. I did, and had five offers to write an intro biology textbook. I went on to author or co-author four college textbooks, for McGraw-Hill Higher Education (intro biology, human genetics, and two anatomy & physiology texts).

More interesting is what inspired me to write my most recent book, “The Forever Fix: Gene Therapy and the Boy Who Saved It”: a little boy regaining his eyesight, four days after undergoing experimental gene therapy. In gene therapy, researchers use viruses to deliver healthy genes to replace missing or malfunctioning genes.

I’d written about children having gene therapy in my textbooks, but The Forever Fix is a STORY, a fast-paced, emotionally wrenching narrative nonfiction account of this biotechnology, seen through the eyes of families and medical researchers. Although 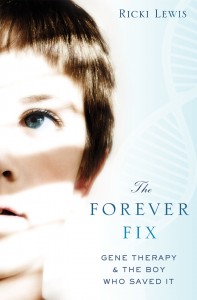 gene therapy has been around since 1990, no one else, to my knowledge, has written a book about it for the average reader.

Sylvia:  Now that wasn’t boring. Your books are learning tools for students!  Is there a message in your novel that you want readers to grasp?

Ricki: The Forever Fix is not a novel, it is a true story, and therein lies its power. I would like readers to immerse themselves in the narrative and forget that they are reading about science. So many people fear science, or regard scientists as nerds. Science simply explains how the world works.

My book chronicles how scientists learned to correct genetic errors, and tells the stories of the children who participated in the clinical trials. Some made miraculous recoveries, like the hero of the book, Corey. Others died. And others are living extended lives in severely restricted bodies.

A second but also important message is a celebration of women. The theme of feminism was not intended in The Forever Fix, but it emerged as I read about women no longer with us, like Dr. Myrtelle Canavan, and interviewed the heroines of today, like Drs. Jean Bennett, Kristina Narfstrom, and Paola Leone. The fabulous Salzman sisters single-handedly put together the team that developed successful gene therapy for adrenoleukodystrophy, the horrible disease that is the subject of the 1993 film “Lorenzo’s Oil,” even though their own boys couldn’t benefit from it. One of the most powerful characters in the book is Lori Sames, whose little girl Hannah is one of only 52 people in the world who has giant axonal neuropathy – a disease similar to ALS (Lou Gehrig’s disease). I also interviewed gene therapy researchers who have Y chromosomes, including the founder of the field, who helped me from prison (a side story that ended up on the cutting room floor) and the researcher blamed for the death of an 18-year-old in a gene therapy trial but who has also saved many lives.

A third theme is the power of parents of children with rare diseases, who the pharmaceutical industry, until recently, ignored. Some 30 million people in the U.S. suffer from nearly 7,000 rare diseases (those that affect fewer than 200,000 people). These brave moms and dads form not-for-profit organizations that find researchers and fund their work. They are all amazing, and my book honors them.

Sylvia:  Do you have any advice for other writers?

Ricki: It’s difficult to give advice, because publishing is changing so rapidly. But the basics remain. Learn how to write well by reading, reading, and more reading. Pay attention to how the writer writes. Follow “The Elements of Style.” Short paragraphs. Alternating sentence lengths. Varied words. Active voice. Consistent voice and tense. Realistic dialog.

Writing dialog comes more easily to some than others. Study how a bestselling novelist does it, and listen carefully to the way people speak. Just use “he said” or “she said.” You don’t have to write “she said angrily” because the words themselves should convey her anger. “Show don’t tell” is the most important rule of storytelling.

If you self-publish, hire a professional editor and copyeditor. In traditional publishing, at least a dozen pairs of expert eyes shepherd a manuscript towards publication. This may be why traditional bookstores do not usually sell self-published titles.

Sylvia:  Great advice! What marketing techniques have you used to sell your books and which ones have been most successful?

Ricki: With the exception of my on-demand published novel, I haven’t had to sell my books, because I had traditional publishers (McGraw-Hill, Blackwell Science, Routledge Press, and St. Martin’s Press) whose sales reps sell the books to bookstores. The publishers have transitioned well to the e-book platform.

I have to balance my efforts to market The Forever Fix with those of the publisher. I’ve been active on Twitter, Facebook, LinkedIn, and discussion groups for professional organizations. My editor got great blurbs, and those appear on the Amazon page (http://amzn.to/foreverfix). I don’t yet know whether my efforts will pay off.

Most helpful of all was something I didn’t even know existed and I had nothing to do with– a starred review in Publisher’s Weekly, where booksellers, librarians, and the media go to select books to buy or review. This happened because St. Martin’s sent out many advance review copies of the book. I’ve hired an outside publicist to get extra radio interviews.

I blog, and write for Medscape, which gets my name out to the medical community every few days. I’ve also been a magazine science writer for 30 years, and zillions of college students have used my books. I hope that helps and doesn’t hurt!

These days to get an agent and traditional publisher you have to be an expert, have experienced something extraordinary and written a compelling memoir, be a celebrity or slept with one. My textbooks and PhD helped me for The Forever Fix, but I feel it was the idea – the true story of a child regaining eyesight as a jumping off point to chronicle a biotechnology – that caught the attention of my agent and editor. I got lucky.

Sylvia:  Why should we buy your book?

Ricki: It’s a good read, in the vein of “The Immortal Life of Henrietta Lacks.” And gene therapy is a “forever fix,” a solution to medical problems, that will grow from the rare inherited diseases it was pioneered on, to more common ills such as age-related macular degeneration, AIDS, and Parkinson’s disease. The final chapter describes these applications.

The Forever Fix is about people – and dogs. In addition to the wonderful researchers mentioned above, we meet the children of gene therapy:

And the wonderful dogs! When Corey was born in 2000, the first sheepdogs were having the very same surgery that he would have – the dogs naturally have the same disease (Leber congenital amaurosis type 2). The families of blind children adopt the dogs. Corey’s cure would never have been possible without animal research – another theme.

The book also has a wonderful photo essay.

Sylvia:  Is there a special place that you prefer when you write?

Ricki: I live near Schenectady, NY, a very peaceful and beautiful place. My office window looks out over woods. My daily companions are three aged cats, a tortoise, and many stuffed hippos. The writing life was much lonelier before the Internet. I also love to write on Martha’s Vineyard, and on trains. I would write on planes if they didn’t cram people in like sardines.

Sylvia:  What projects are you currently working on?

Ricki: I’m exploring writing another narrative nonfiction book, about stem cells. But The Forever Fix was the story of a lifetime that just fell into my lap and I don’t think I can find another as compelling. I’d like to see it adapted to film. I’ve signed with the Macmillan Speakers Bureau, but have to learn to give the “book talk” without crying!

Sylvia:  What is your POWER WORD? Why this word?

Ricki: Hope. One of the blurbers of my book zeroed in on this:

“Ricki Lewis gives us the inspiring story of gene therapy as told through Corey’s eyes–literally.  Her book delves into the challenges modern medicine faces–both in its bitter disappointments and great successes–but it goes much deeper than that.  With empathy and grace, Lewis shows us the unimaginable strength of parents with sick children and the untiring devotion of the physicians who work to find ‘the forever fix’ to save them. But best of all Lewis gives us a story of profound hope.” –Molly Caldwell Crosby, author of The American Plague: The Untold Story of Yellow Fever, the Epidemic that Shaped Our History

Sylvia: Ricki, This has been great. Thank you for your time. I enjoyed learning more about you and your book. Please let our readers know how to contact you.

Ricki: You are very welcome. See below.