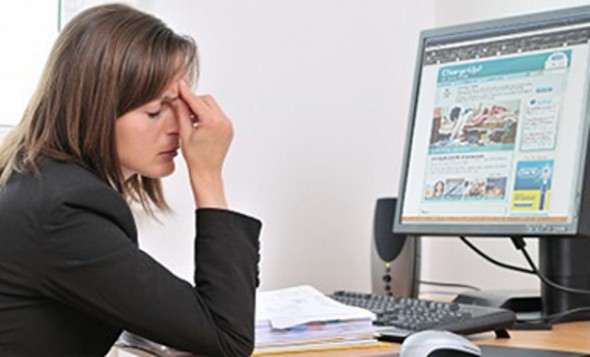 Who hasn’t hit a slump in the middle of the afternoon? Or kept slamming the snooze button when the alarm went off for work?

“Most people have at least a few bad habits that make them feel tired and run-down,” says Robert Thayer, a professor of psychology at California State University, Long Beach, and author of Calm Energy: How People Regulate Mood With Food and Exercise. “The problem is they usually don’t recognize what they’re doing wrong.”

Here, Thayer and other experts identify the five most common energy vampires — and how to escape them before they suck the life out of you.

Admit it: What is email really but an endless stream of interruptions? If you’re constantly stopping your work to respond to messages, you’ll feel worn out without accomplishing much at all, says Leo Babauta, author ofThe Power of Less: The Fine Art of Limiting Yourself to the Essential … in Business and in Life. Worse still, you might have to stay late at the office to finish the projects you didn’t get done because you were on email all day.

Bite Back: Set two or three times each day when you’re going to empty out your inbox — and then be done, suggests Babauta. “Don’t even have your email program on your screen for the rest of the day so you won’t be tempted,” he says. Let your boss know about your change (say you want to be more productive) and ask him to just call you if he needs anything stat. Remember that old relic, the telephone?

Bite Back: If that mid afternoon energy drain is all too familiar, Thayer suggests taking a 5- to 10-minute walk. In one of his studies, he analyzed how eating a candy bar affects mood in comparison to taking a brisk 10-minute walk. Two hours later, participants who took a walk were still more energetic. The candy bar eaters, however, felt worse than they did before they had the snack.

If you’re hungry, opt for snacks — like a handful of nuts, cheese and whole-grain crackers, or whole-grain tortilla chips and salsa — that release glucose slowly into your bloodstream, giving you steady energy, suggests Dawn Jackson Blatner, a registered dietitian and spokeswoman for the American Dietetic Association. Bonus: They’re better for your teeth too.

Sure, it’s hard to squeeze in eight hours of sleep. By the time the kids are in bed and dinner is cleaned up, you want a little time for yourself before you the hit the sack. And even if you’re ready to catch some z’s, your body may have other plans. About three-quarters of Americans have trouble falling asleep at least a few days a week, according to the National Sleep Foundation. Still, getting less than seven to eight hours of shut-eye is a surefire way to run yourself down. “Your brain retains more information from the previous day if you’ve had a good night’s sleep,” says Thayer. Sleep also improves your concentration so you can get your tasks done faster.

Bite Back: If you’re staying up late to watch the news, you’ve just got to shut it off and get some rest. But if you’re there in bed counting sheep, try putting on some relaxing music. In one study, in the Journal of Advanced Nursing, participants improved their sleep quality by 35 percent by listening to soothing music at bedtime. And once you get into a routine, stick with it. It helps reinforce your body’s sleep-wake schedule, so you’ll doze off faster.

You know those people who are constantly complaining or who never have a nice word to say? “They can drain the energy out of you without you knowing it,” says Babauta. Sure, you’re sweet to listen to their rants once in a while. But daily, even weekly, is way too much.

Bite Back: You might not be able to rid your life of these people entirely — maybe they’re relatives. But you can cut way back on your interactions with them, says Babauta. For instance, if your sister starts on another one of her tirades about how rotten her life is, tell her you understand, you sympathize, but you simply don’t have time to talk right now. Suggest a phone call next week or the week after. Maybe in the meantime, she’ll find someone else to unload her problems on.

Don’t worry: Experts say it’s OK to have a cup or two of coffee in the morning. “In fact, the caffeine boosts your energy and helps you get going,” says Blatner. But grabbing another cup in the afternoon will definitely interfere with sleep. In fact, half of the caffeine from a 3 p.m. brew is still in your body at 9 p.m.

Bite Back: Make sure your meals have staying power, and you’ll be less inclined to reach for caffeine-induced energy, says Blatner. Imagine dividing your lunch and dinner plates into four equal parts. Create your power meal by filling one part of the plate with whole grains (like brown rice or whole-wheat bread), one part with lean protein (chicken breast, hard-boiled egg, or turnkey), and the other two with fruits and veggies. Then, it’s off the races for the rest of the day!

About Author:  Karen Cicero is Completely You’s Need to Know blogger.  A health journalist and magazine editor with more than 15 years of experience, she has contributed to such publications as Prevention, SELF and Health, and she has edited the dental column for Heart & Soul magazine.