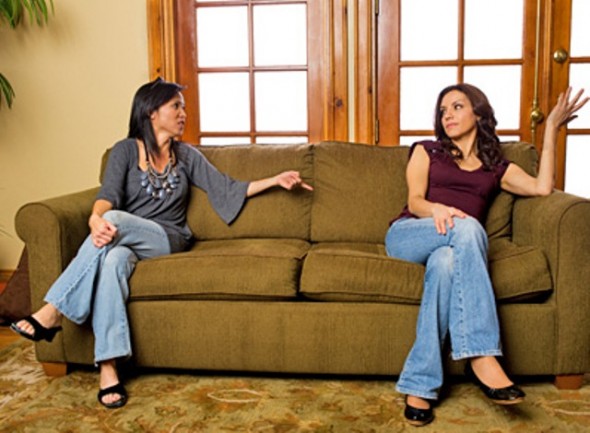 Your child has a fight with a friend. She’s in tears; you’re furious and ready to defend her. But should you? In this age of helicopter parenting, it’s hard not to step in when you see your child in a social dilemma. But that’s not always the answer.

“In recent years, I’ve seen a trend of mothers confronting other mothers — by phone or email, or in person — to resolve their kids’ social issues; I call it ‘Mama Drama,’” says Joyce Marter, a psychotherapist and the owner of Urban Balance LLC in Chicago. “It’s problematic on several levels: It not only crosses boundaries, but also prevents kids from developing coping skills and learning that it’s not a perfect world where everybody always gets along and gets included.”

Laurie Zelinger, a child psychologist and the author of Please Explain Anxiety to Me! Simple Biology and Solutions for Children and Parents, agrees. “Social slights occur and recur throughout life,” she says. “You lived through them, so your child deserves the opportunity to live through them too.”

Here are some common kid dramas your child may face, and how to help her survive them — without being a drama mama.

Drama: Your second-grader is hurt because she didn’t get invited to a classmate’s birthday party.

Solution: Don’t call the birthday child’s mom and demand an invite for your child. Not only is this rude, but it also puts the mom in an awkward position if she has limited space or money for the party.

Instead, help your child deal with her disappointment by sharing your own sadness about times when you were left out of parties or clubs. Remind her that she didn’t invite the entire class to her last birthday party, and, if the classmate isn’t a close friend of hers, point that out. Finally, suggest a get-together with her true pals. “The real problem might be that she needs more social interaction,” says Marter.

Drama: Your son complains that no one plays with him at recess.

Solution: Talk to your child about being excluded, and make supportive statements — “I bet you never expected that to happen” — to validate his feelings. “If you ask too many questions, you’ll sound like a detective and put him on the defensive,” cautions Fred Zelinger, a child and family psychologist in Cedarhurst, N.Y. “You’ll end up getting less information than you would in a normal parent-child conversation, where he tells you something and you respond with a comment.”

Call or email his teacher, explain the situation and ask if she’s noticed anything that might be causing the problem. Maybe your child is being left out because he doesn’t play fair or gloats too much when he wins. “You can’t force other kids to play with him at recess, but you can coach him on his behavior and how to engage a different group of kids,” says Marter. “Urge him to be assertive and say things like, ‘I want to play this game too.’”

Drama: Your 10-year-old is on the outs with her BFF — whose mom just happens to be a good friend of yours.

Solution: Since you’re close with the other mother, it’s OK for both of you to help the girls resolve their differences, according to Marter. First, ask your daughter what caused the rift, keeping in mind that she’s telling only one side of the story. Be supportive — “It hurts when your friend is mad at you, doesn’t it?” — and suggest she try a heart-to-heart to end the fight.

From there, discuss the issue with your friend — without placing blame on anyone: “It’s hard to watch our girls go through this. It’s probably just a misunderstanding. Let’s get them to sit down and work it out.” Says Marter: “Give your child the tools she needs to have an effective conversation with her friend, but don’t have the conversation for her.”

About Author: Cynthia Hanson is a journalist who writes for many national publications, including Ladies’ Home Journal, Parents and American Baby. She is a frequent contributor to Life & Beauty Weekly.