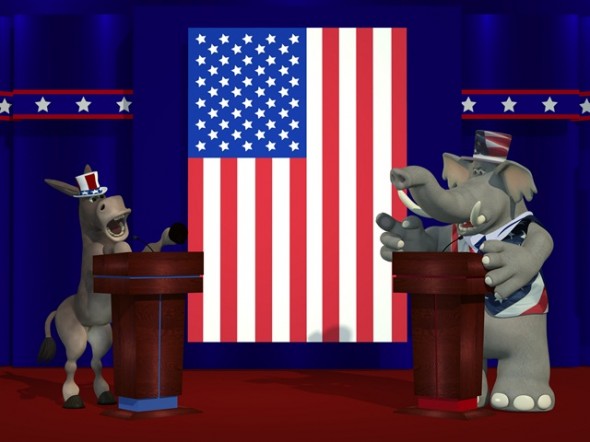 Politics at the dinner table can often turn a meal into an ugly affair. I am guilty of being the instigator of such ugliness when I, quite seriously,  suggested that the entire electoral process be converted to an Ebay auction.  Please hear me out as I am not so sure this is a bad idea and would most  definitely free up a lot of air time for the networks.

I am well aware and very appreciative of the souls who fought for our right  to vote, and have a voice in our government. It’s a shame to see what we have  done with it. The media and Internet are saturated with hourly, it seems  sometimes, updates of who said what about who, which polls show who is the  current frontrunner, and who can best defeat Obama.

While I don’t have a degree in political science, I consider myself an  average American with slightly above-average intelligence. I DON”T UNDERSTAND.  As an over simplistic analogy, how will changing (or renewing the contract of)  the team coach result in a better team? Congress has been behaving like a bunch  of spoiled kids who don’t want to lose at the game, bickering and caring more  about their re-election than what the people they represent really need. If  Obama is to serve a second term, will this improve? What a sad statement if that  were the case, ie why couldn’t they have done it all along? I also don’t  understand what difference Romney vs Santorum vs Gingrich vs Paul vs Joe the Plumber will make if the same issues exist on the Hill.

One thing that has increased in value, and perhaps the ONLY thing, is the  cost of elections. While I don’t pretend to understand the rules of these new  Superpacs, you would have a difficult time convincing me that the candidates  don’t know who is behind their super sized contributions. This troubles me on  several fronts. First and foremost, it seems that this election more than ever  is to some extent about egos, and the result for me is to add a level of  divisiveness to the Republican Party as a whole. There are 4 men spending money  that could be much better used on real issues (ie job creation, feeding hungry  Americans, etc) and could/should, for the sake of the party as a whole, pick  someone and get on with it. I am tired of hearing about the millions that they  receive in contributions, make personally, and how they alone can beat Obama. Another issue with the astronomical cost of this ‘process’ is the statements  that these candidates won’t entertain special interests (pork belly projects, or  whatever you want to call them.) Does anyone believe that a Superpac donation’s  identity won’t be made known at some point and favors expected? Whoever winds up  winning this auction is going to inherit the ongoing ‘favors’ that incumbents  have, and nothing seems to happen in one term (in terms of ousting corruption at  least.)

The sad part is that I used to be interested in this whole election scenario.  The non incumbent party would be gracious and decide on a candidate like  relatively mature adults, and move forward for the good of the party and the  country as a whole. Now my biggest fear is a crash course and never ending media  coverage on how a brokerage convention for delegates works. These are some of  the reasons why I don’t see an issue with putting the whole mess on eBay. The  Superpac members could sign up (if they aren’t already members), set the opening  bid at about one million in escrow and let the bidding begin. An added bonus  would be that the news media could focus on something else instead of dragging a  one hour debate into 2-3 days of coverage. Please, wake me in November when  hopefully this ends. What will change? Who knows….. I guess we have to stay  tuned whether we like it or not.

Hello, I wish everyone the best of luck in keeping your job if you have one,  finding one if you need one, and happiness in whatever you do.

About Author:  Catherine K Murphy was born and raised in St Louis, Mo and then attended college for 2 years in Pennsylvania.  She began working in the corporate world of mainframe computing and consulting in 1983 where she stayed until 2002. During this time, she had 3 children and lived in Colorado, New York, and New Jersey. After being ‘found’ by her birth parents, she moved with her youngest daughter to Missouri to connect with them.  She self-published an autobiographical book to share with her birth parents, and briefly re-entered the corporate world.  She was diagnosed with cancer (currently cancer-free) and underwent a year of facial (nose) surgeries and treatments. Currently she lives in the country and am pursuing writing as a profession.