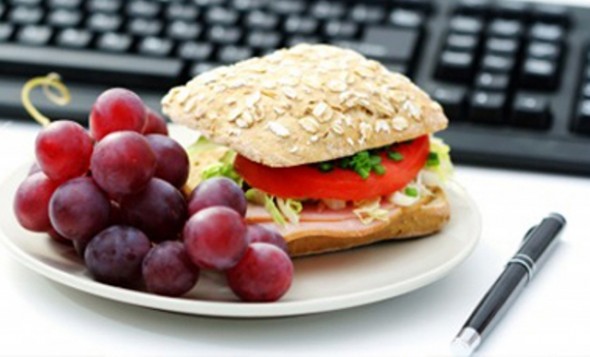 Do you run out the door in the morning with just coffee in your stomach — or maybe nothing at all? We’re a country of breakfast skippers: Although 93 percent of adults agree that a morning meal is an important part of a healthy diet, more than half of us don’t practice what we preach, according to a recent survey by the International Food Information Council.

What’s your excuse? Dawn Jackson Blatner, a registered dietitian, spokesperson for the American Dietetic Association and nutrition consultant for the Chicago Cubs, makes toast out of every reason to avoid starting the day off right.

Wake-up Call: Eating in the morning actually helps you slim down. When you’re sleeping, your metabolism — how you burn calories and fat — slows to practically a crawl. But a meal revs up your body’s fat-burning ability, says Blatner. Besides the metabolism boost, breakfast gives you willpower. “I think of it as the prevention meal,” she says. “When you eat in the morning, you’ll be less likely to take second helpings at lunch and dinner, and have a better chance of resisting temptations throughout the day, like the bowl of candy at work.”

In fact, four in five successful dieters — those who have lost 30 pounds or more and kept it off on average for six years — make time for breakfast every day, according to the National Weight Control Registry at the University of Colorado Health Sciences Center in Denver. And don’t let your kids out of the house on an empty stomach either. A recent study of more than 4,000 British schoolchildren found that those who skipped breakfast were 62 to 92 percent more likely to be obese than students who had a morning meal.

Breakfast Blow-off: “I don’t feel like eating in the morning.”

Wake-up Call: Skipping breakfast will leave you sluggish all morning long. By the time you wake up, your body has used up most of its fuel for energy overnight, and your blood sugar is low. If you don’t raise it with food, you’re dooming yourself to feeling fatigued and unfocused for hours. In fact, research shows that eating breakfast improves performance on brainy tasks for both children and adults.

If you’re not hungry shortly after you wake up, you’re probably eating too much at night, says Blatner. Cut back on after-supper snacks and eat less at dinner. “It just takes a couple of days to re-adjust your body to the new schedule,” she says.

Wake-up Call: Whether you’ve got to get to work or your workout, there are many good options you can make in five minutes and eat on the run. Blatner’s equation for a balanced breakfast: one whole-grain food (toast, cereal, English muffin) and one protein-rich food (milk, yogurt, nut butter, eggs, turkey bacon), plus at least one serving of produce (any fruit or veggie). According to a recent study at the University of Nottingham, eating a whole-grain breakfast with fruit can help you burn 50 percent more fat at the gym than chowing down on refined carbs like white bread and doughnuts.

Eating this way is easy and delicious. Try these quick and easy morning fixes:

Wake-up Call: If you’re not a fan of typical breakfast fare, eat something else that contains the aforementioned three important breakfast components. Dinner leftovers like veggie pizza on whole-grain crust, brown rice with dried fruit and nuts, and even creamy tomato soup with whole-grain croutons all count as a nutritious breakfast. Blatner’s own favorite creation: “I whip low-fat cottage cheese with chives and lemon, and spread that on my whole-grain toast. Then I put a couple of tomato slices on top. It reminds me of Italy.” Mangia!

About Author: Karen Cicerois Completely You’s Need to Know blogger. A health journalist and magazine editor with more than 15 years of experience, she has contributed to such publications as Prevention, SELF and Health, and she has edited the dental column for Heart & Soul magazine.