Sylvia: Hi Denalerie, It is such a pleasure to interview you.  I know how busy you are so thank you for your time.  Please give our readers a brief introduction of yourself and a little about your book. 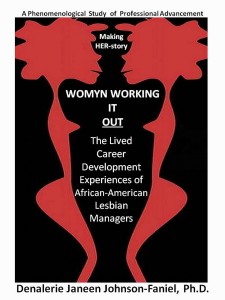 My name is Dr. Denalerie Johnson-Faniel and I wrote the book Making HER-story Womyn Working It Out! focused on conflict, sexuality orientation, race, gender equity, and career growth.  The book is a compilation of phenomenological research, interviews, and recommendations regarding the lived experiences of African-American lesbian managers.  The book is on sale at www.GBFresearch.com and I hope to publish more on helping marginalized people flourish economically and maintain their health, well-being and freedom!

I have a background from various state, national, and global civic organization positions; and as a disabled person I became a pioneer as the youngest director, the only person of color, the first woman, and the only out lesbian.  I am the owner and principal of 3D Management Consulting, LLC providing individual career counseling services and programmatic strategic planning for program development at non-profit organizations.   I am also a part of the civil rights movement with the 60 year old New Jersey Urban League of Morris County board of directors and utilized my consulting skills as their affiliate president and CEO.  I am the former executive vice-president of workforce development for Dress for Success Worldwide, an international women’s leadership based non-profit promoting the economic independence of disadvantaged girls and women by providing professional attire, scholarships, a network of support and career development tools to help one thrive and consult as the senior policy research associate of the Service Women’s Action Network www.servicewomen.org, dedicated to help elevate living standards of under served communities with a focus on veterans, human rights, and military women’s equality and services.

I was recognized as one of the 2010 Network Journal’s Top 40 under 40 Black Business Professionals and was also selected for a 2011 NJ Global Women’s Economic Impact honor.  A personal passion of mine is ensuring that, as a global Avon sales representative, my proceeds benefit cancer research www.YOURAVON.com/DFANIEL in memory of my mother Ella Faye Ireland who was the inspiration for my book.  My wife, T.L., and I are legal civil union newlyweds residing near Princeton, NJ. I thank the National Association for Women on the rise for offering leadership, service, mentorship and guidance to ALL women and for being aligned with my personal goal of providing a voice to those seeking equity.

Sylvia:  You are very welcome.  It is very important for me as founder of NAWR to embrace and support ALL women.  Your fight for equality is very liberating!  I am looking forward to reading your book.  What inspired you to write it?

Denalerie: I completed my dissertation on employment discrimination and the career advancement of women of color and just published a book called Making HER:Story-Womyn Working it Out!, which is an overview of the lives of African American lesbian women that have worked their way to the role of manager while being out of the closet.  The book provides tips and insight for breaking down system barriers including racism, sexism, and homophobia.  In 2010, the number of African-American women who participated in the labor force was 60.3% and women comprised 51.5% of management, professional and related positions, but the alarming issue is that African-American women comprised only 5.3% of this group.  Women of color held just 1.0% of all top earner positions at Fortune 500 companies and it was not until 2009 that a corporation hired a Black woman to serve as CEO of a Fortune 500 company-that was Ursula Burns of Xerox.  In addition, it remains legal in 29 states to discriminate based on sexual orientation. In 29 states, it’s still legal to fire someone solely because they’re lesbian, gay, or bisexual; in 38 states it is legal to fire someone solely for being transgender.

Almost one in ten lesbian and gay adults state they were fired or dismissed unfairly from a previous job or pressured to quit a job because of their sexual orientation and 60% of lesbian and gay adults in America’s workplaces report facing some form of hostility or harassment on the job.  Thousands of hardworking lesbian, gay, bisexual and transgender Americans have lost their livelihoods simply because of who they are. And millions more go to work every day facing that threat.  It’s time to ban workplace discrimination on the basis of sexual orientation and gender identity.  Homophobic discrimination and hate crimes faced by those that identify as gay might have an even greater impact on those African Americans females who proclaim themselves as lesbians and women of authority.  Very little is known, in terms of research, about lesbian adult development. There is still a continued invisibility of African American lesbians in academic and literary texts and it is detriment to African American lesbian identity, professional career advancement, and our community.

My research explored the intersections of race, gender, and sexual orientation in the lives of African American lesbians and its effects on the development of career and professional identity. This study explored the influence of sexual orientation on the career paths of lesbian managers. The participants noted that they often were given assignments that would take them out of the spotlight instead of showcasing their skills.  An overarching issue for the participants was that they do not feel safe in their work environments and that they have feelings of mistrust, inferiority, inequity, depression, and insecurity, as well as increased health issues and stress, based on their efforts to find a comfort level at work. There is also a need to address, heterosexual, or discrimination against gay men and lesbian women that can result in harassment, loss, lack of promotion and advancement, lack of same-sex domestic partner benefits, social isolation, and other factors; especially, given that in the United States, there is no federal legal protection from these anti-gay discriminatory practices in employment.  Results of this study may have viable implications for employers, vocational counselors, and human resources professionals.

Sylvia:  As an African American lesbian manager, what is the learning from your book Making Her-Story: Women Working It Out?

Denalerie: The purpose of this doctoral research study is to describe how the participants perceive their career development experiences. The research explored the lived experiences of out African American lesbian managers in the workforce. “How does employment discrimination, or the fear of such discrimination, affect African American lesbian managers’ perceptions of their career advancement?” Hate crimes and job discrimination reinforce the need for effective diversity initiatives in the workplace, including non-profit places of employment, especially given that the United States does not offer federal protection for discrimination based on sexual orientation.

Issues around being out on the job without any federal protection against discrimination and harassment include: Differential structures of opportunity and power block women’s access and advancement to leadership positions; Isolation and exclusion; black lesbians really are not visible in corporate America; lack of influential mentors; few role models whose styles were feasible or congruent with their self-concepts; African American lesbian managers have had to fight their way to the top and fight misperceptions, but it still feels like tokenism or affirmative action; Black women struggle with multiple barriers as it is and being a lesbian makes it harder given sexual harassment on the job and the lack of equitable benefits such as family leave, etc.; excessive workloads leave limited time for the informal socializing and mentoring that promote professional development; more masculine and assertive Black women appearing as intimidating to corporate America; more feminine women often being liked but not respected because they are judged too soft, emotional, and unassertive to make tough calls and project the necessary presence in positions of authority; African American women are especially vulnerable to such stereotypes and risk being seen as overly aggressive and confrontational; facing a trade-off between competence and likeability in circumstances where effective leadership requires both; feeling less deserving than men of rewards for the same performance and less qualified for key leadership; and internalized stereotypes creating a psychological glass ceiling.

Sylvia: Do you have any recommendations for Out Gay Professionals and their allies?

Denalerie: Given the recent repeal of Don’t Ask Don’t Tell, sexual assault, violence against women, and the rampant LGBT bullying and harassment, the Service Women’s Action Network (SWAN) www.servicewomen.org, can be a great resource and their peer and legal assistance helpline number is 1-888-729-2089.  In most states, it’s 100% legal to fire or refuse to hire someone based solely on their sexual orientation or gender identity or expression.  Word from Capitol Hill is that the House may soon vote on the Employment Non-Discrimination Act (ENDA) – the bill that would make workplace discrimination illegal against lesbian, gay, bisexual and transgender people, once and for all.  I have been to Capitol Hill meeting with my congressional reps.  I recommend reaching out to your politicians and details can be found via the Human Rights Campaign, www.hrc.org , and my book is a great reference and inspiration.

Sylvia:  Where can readers buy your book?

Denalerie: Making HERstory: Womyn Working It Out! The Lived Career Development Experiences of African American Lesbian Managers can be purchased:

Interview can also be downloaded via Mp3,