Book Review by Sylvia Browder:
Rasputin and The Jews: A Reversal of History by Delin Colon

I commend author Delin Colon for an outstanding job in researching the life of Grigory Rasputin and sharing her findings in her new book.

If you enjoy reading History, I highly recommend this book! 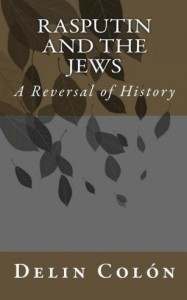 Delin Colón is an author of “Rasputin and The Jews: A Reversal of History.”  She was born in New Jersey and has lived in Maryland, D.C., Florida, California (northern and southern), Montreal and Washington State.  Her undergraduate work was in French, with a minor in Social Psychology, and her graduate work was in Clinical Psychology.  Among many other things (such as working in psychiatric hospitals), she has worked as a technical writer for Sociological Abstracts, a researcher, and owner of a construction company.

She has always enjoyed writing but seem to have a special finite for research and non-fiction.  She also enjoys creating minimalistic collage art.  She lives quietly in the Pacific Northwest with her husband, a fine art photographer.

While it is important to study history to learn about people and events in our past; this genre is rarely on my list of books to peruse.   However, after interviewing Delin Colon and then reading her book, “Rasputin and The Jews: A Reversal In History,” I admit that I was unable to put this book down… intrigued by her attempt to dispel the inaccuracies of Rasputin’s life. I was fascinated from beginning to the very last page.

Interestingly, Delin is the great-great niece of Aron Simanovitch, Rasputin’s Jewish secretary. This enabled Aron to keep a journal of his experiences.  She inherited his outdated memoirs and learned first-hand about Rasputin’s life and his dedication to helping oppressed Russian Jews.

After a decade of research and finding many variations of stories told by others; along with discrepancies with each story; she was determined to rewrite history and ‘right’ the ‘wrong’ betrayal of Rasputin.

Delin is an amazing writer, articulate and skillful.  She was able to grasp my attention and keep it throughout the book. Her accounts are factual and backed up by well supported evidence.

Rasputin and The Jews: A Reversal In History is a must read for those who enjoy history.  Through her hard work and dedication, Delin is successful in her attempt to bury scandals surrounding Rasputin and exposes the real man… modest and religious with the passion to help people; even at the risk of losing his life. He was poisoned, shot, beaten and thrown into a river by government officials.