Sylvia: Welcome Holly. Please give our readers a brief introduction of yourself and a little about your book. 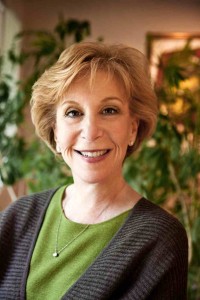 Holly: Certainly, My name is Holly Rozner. When I graduated from Northwestern, I taught English in a Chicago Public School as part of the Illinois program for gifted children. Much later, I went back to school to become a CPA and it was as a tax specialist that I began to see how people make money. Not in the stock market, that was clear. Many of my clients made money buying seats at the Chicago exchanges and then leasing them out. When the Chicago Mercantile Exchange offered a seat that was designed to trade the S&P Index, I decided to buy one. Then, unable to lease it, I used it to trade.

Sylvia: Very interesting!  What inspired you to write your first book?

Holly: The inspiration for TRADE SECRETS came after the FBI infiltrated the two major Chicago exchanges, shortly after the crash of 1987, which had been a milestone moment in my career. The feds placed undercover agents on the trading floors and eventually targeted 47 traders accusing them of making illegal trades. I knew there was a story here and since the landscape of the pits (trading pits) had never been used in a novel, I wanted to be the first to do this. At about the same time, Scott Turow published Presumed Innocent about a fictitious county in Illinois. He was a local guy, a lawyer and though I did not know him, I thought perhaps I could do this too. So I began and it has taken me a very long time to complete this story.

Sylvia: How did you ever find yourself on a trading floor?

Holly: Trading is an unusual profession for women and the 1980’s, there were only a handful of women at the Chicago exchanges. My career actually started very accidentally when my husband and I were in Hawaii and we met someone from Chicago who was on the Options exchange. As he began to explain options, I became fascinated. I had always been intrigued by the stock market, but options were a different animal and when I finally joined the Merc and wandered around looking for a pit that I wanted to trade in, this experience led me into the S&P option pit. Options are more cerebral than futures trading and it felt as if I had more maneuverability.

Without this experience I may never have bought the seat, used it, or had the life experiences that became the background for TRADE SECRETS.

Holly: This is the story of two women whose lives intersect on a trading floor during the crash of 1987 and subsequent FBI investigation. It is a story of survival in a male-dominated world and of not giving up. It is the story of great change for one of the characters and it is also a romance. I want people to come away with inside information about a world which is generally isolated, but also with a vision of possibility in relationships between men and women and between the two women who eventually accomplish much more than all the men in the novel.  This is a woman’s story.

Sylvia: Wow, sound suspenseful and intriguing. Do you have any advice for other writers? 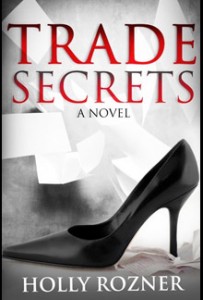 Holly: For me, it was about not giving up. I rewrote this book a zillion times, against great odds and tried desperately to find a New York agent, but no one even asked to read the manuscript. It’s hard to keep going, but I did feel passionately about this story and felt it had to be told. I think if the voice is authentic, the writer just stays with it. Finally I decided TRADE SECRETS would either die on the floor of my closet or on Amazon. I preferred the Amazon death.

Holly: Before I finished the publication process, I contacted several local libraries and book stores and booked speaking engagements. I even had the book redone for a private book store who would not deal with me if the text was created by Amazon.  I have tried to contact as many people as I can, have sent out hundreds of emails, built a website and finally, hired a PR firm.

Sylvia: Sometimes it takes all of what you’ve done and more!  Launching a book is much like starting a business. You must have a plan in place.  One size does not fit all!  Why should we buy your book?

Holly: You should buy it because it is interesting and sexy. Kirkus gave it a great review, much more than I could have ever expected. This is a story that has never been told. It has a financial angle and an insider’s perspective that is unique.  This is a Chicago story, a women’s story, a financial story with some mystery and a touch of revenge.

Holly: I have a small office in my house with a big picture window and a lot of books.

Holly: I am germinating my next novel, not yet ready to start. But it is a very serious story, based on a Shakespearean tragedy with complex themes. It is also a woman’s story, but this time more about being a mother and the unfortunate endings that can occur in families.

Holly: My power word is Intelligence.  If you have this, you can do anything in the world. If you don’t, then find it somehow so no one can lick you.

Sylvia: “Action is the real measure of intelligence.” Napoleon Hill.    Great POWER word! Well Holly, it’s been pleasure learning more about you and your book. Where can we find more info about you?