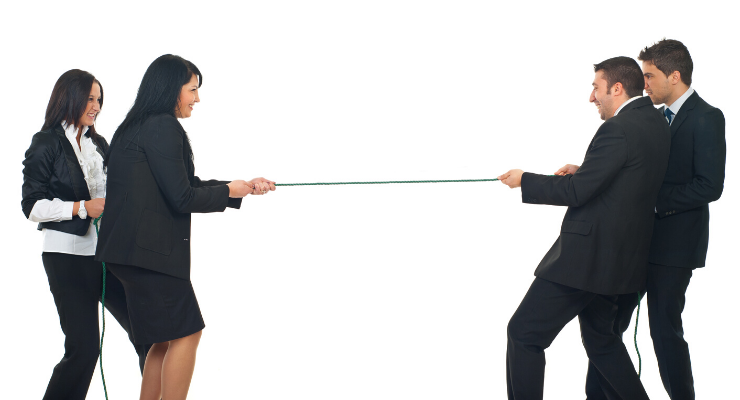 The number of people who call themselves entrepreneurs is growing day by day. People of both genders are following their dreams of creating their own startup. While the majority of small business owners are men, both genders have certain advantages that give them an edge over the other. So, which gender really does make the best entrepreneur? Let’s first discuss the general perception and then the actual reality of the state of today’s startup runners.

In general, the common perception is that men are better at entrepreneurship than women are. People often believe this to be true, even if they do not say so outright. This is evidenced by three separate academic studies completed in the past few years. All of these scientific experiments used randomized controlled trials to reach these findings.

Each study was different and focused on different aspects of entrepreneurialism. However, throughout these three unique studies, one thing was constant, being a female was judged as a negative. When presented with a female face, name or voice, the participants in each of these experiments reacted more negatively. The made-up female entrepreneurs were less likely to get an investment. They were also assessed as being less competent and their venture ideas were thought to be a lower quality. The third study found that key stakeholders were more likely to try to dissuade female entrepreneurs from beginning their startups. All of these experiments were randomized, which means the only cause of the overall negative assessment was the gender.

Given the growing number of female business owners and their overall success, why were the females judged so much more negatively? It likely wasn’t the biases of men towards females, as all the experiments used a mix of genders. It also probably wasn’t because of an older generation’s stereotypical gender roles, as the studies used a mix of age groups. Gender discrimination is a complex issue and it would most likely be impossible to pinpoint the exact reason for the negative judgment of female businesswomen. However, based on these three studies, it would appear that people have a preset image of what a small business owner looks like, and that person is male. Though that perception may be conscious or unconscious, it causes both men and ladies to judge male entrepreneurs as being better than female ones.

When it comes to business, or anything else, men and women are different. Both groups have their own strengths and weaknesses. In general, the characteristics that typically fit with each gender give them unique advantages over the other in the world of business.

Where Does Men Excel?

They focus more on money and aggressive growth. When it comes to business, most men enter with the goal of making money. Ladies put more emphasis on doing work that they enjoy and achieving a better work-life balance. As with networking, men have a more aggressive approach to business growth. For this reason, you will see more men running larger businesses.

Where Does Women Excel?

They long-term success and take more calculated risks. These two factors go hand in hand with each other. While men are more focused on making money in the short term, ladies spend more time thinking about the long-term survival of their business. Ladies also tend to take more calculated risks. Risks are necessary for a business to continue to thrive and women assess risks much more realistically than men. 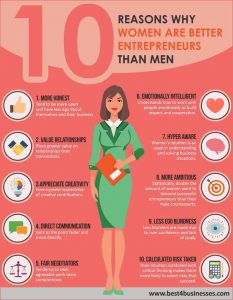 They have more ambition. The Centre of Entrepreneurship has found that ladies are two-thirds more likely to start their own business within the next few years. Men were only one-third as likely. Additionally, the females who already own a business were more likely to state that they wanted to start another one.

They are not over-confident. Confidence in business is a great asset, but over confidence can lead to poor and risky decision making. Men typically overestimate the financial and overall success of their business. Ladies, on the other hand, are confident in their companies but are more realistic in their assessments.

Who Is The Best Entrepreneur?

Both genders have their own noted strengths and traits that give them an entrepreneurial advantage. It is also true that business owners of both genders experience success in their chosen fields. However, according to the 2016 BNP Paribas Global Entrepreneur Report, females outperformed their male counterparts in multiple ways.

This report is based on a survey of more than 2,000 entrepreneurs from around the world. Ninety percent of the females surveyed noted more stable profits from their companies. Because they have so many traits that contribute to entrepreneurial success, female business owners are seeing more profit year after year. With proven business prosperity, the number of female entrepreneurs is expected to continue to grow with each coming year.

Author Bio: I am Marsha Kelly, and I sold my first business for more than a million dollars. I share my hard-won experiences as a successful serial entrepreneur on my Best4Businesses blog . I also regularly post business tips, ideas, and suggestions as well as product reviews for my business readers. I am a serial entrepreneur, who has done “time” in corporate America and has learned what products and services really work well in business today. You can learn from my experience and my associates’ as we shop from the internet for tools, supplies, and information to build our businesses and improve lives financially.

Got the entrepreneurial bug? Stumped for business ideas? Have some fun and get inspired using our Business Idea Generator.  Hundreds of profitable business concepts at the tip of your finger at the click of your mouse!